Post: Infographic: How many mass shootings took place in US in 2022?

On May 24, an 18-year-old gunman stormed the Robb Elementary School in Uvalde, Texas, fatally shooting 19 children and two teachers, before being shot dead by police, casting a spotlight on gun violence in the United States.

The massacre is the latest in a years-long series of mass shootings in the US, which according to a tally by the non-profit Gun Violence Archive was the 213th such incident of 2022 in which four or more people were shot or killed – not including the attacker – in a single incident.

Based on the definition above, there have been at least 17 other mass shootings across the US since the Texas school shooting, one week ago.

However, because there is no common definition of a mass shooting, depending on which database is used, since the start of this year, the number of mass shootings across the US is anywhere between three and 268.

How is a mass shooting defined?

There are at least five active databases that track mass shootings across the US, each with a different threshold for the minimum number of casualties, location of the incident and motivation of the shooter(s).

The Mother Jones and The Violence Project trackers have the most restrictive definitions of a mass shooting, counting incidents with at least three or four fatalities respectively, where the shooting was in a public place and where the shooter’s targets were indiscriminate in nature.

The Everytown for Gun Safety database has a broader definition of a mass shooting – where four or more people are killed but where the shooting occurred anywhere including in a private setting and where the shooter had any motive including crimes of armed robbery, gang violence or domestic violence.

The Gun Violence Archive and Mass Shooting Tracker have the least restrictive definition and include incidents where guns are used to kill or injure four or more people irrespective of location or the shooter’s motivation.

Based on these definitions, there were between six and 818 mass shootings across the US in 2021. 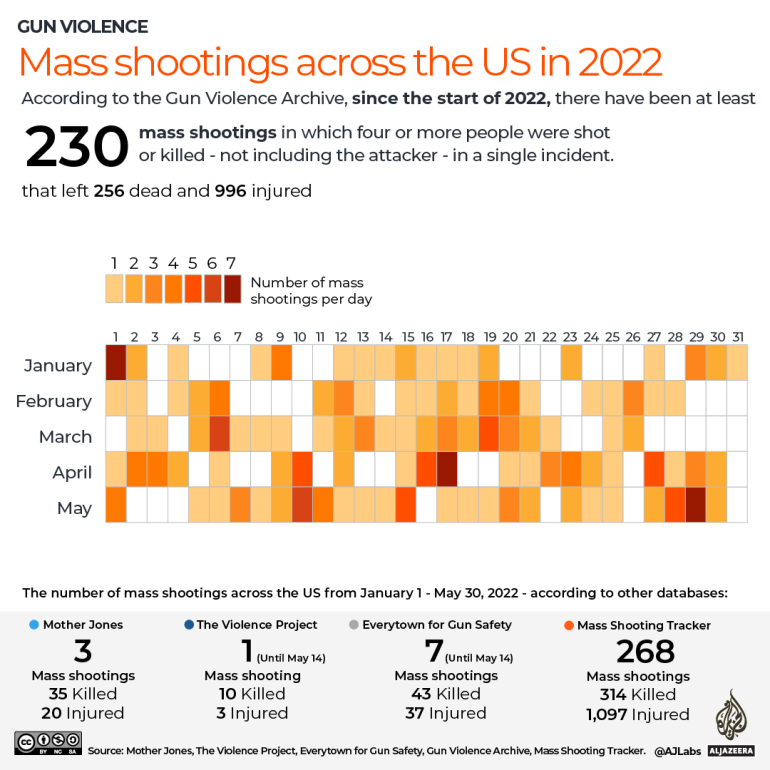 On a federal level, the Federal Bureau of Investigation (FBI) does not specifically track mass shootings, rather the federal law enforcement agency defines a “mass murder” as an incident where four or more people are murdered in one event.

Active shootings in the US on the rise

A data analysis by the Rand Corporation found that inconsistencies in defining mass shootings by government agencies have led to different assessments of how frequently mass shootings occur and whether they are more common now than they were a decade or two ago.

A useful proxy then, is to measure what the FBI calls “active shooting incidents” – which does have an agreed-upon definition among government agencies.

Since 2014, the FBI has kept track of active shooting incidents which it defines as “an individual actively engaged in killing or attempting to kill people in a confined and populated area; in most cases, active shooters use firearm(s) and there is no pattern or method to their selection of victims”.

The FBI noted that its active shooter report does not encompass all gun violence or even all mass shootings.

The deadliest mass shootings in the US

Seven of the 10 deadliest mass shootings in US history took place during the past 10 years alone, half of them occurred in Texas alone.