In 1910 Glasgow became one of the first police forces in Britain to recruit canine officers – and rather than German Shepherds, they were Airedale terriers trained in Carnoustie.

In the early 1900s crime in parts of Glasgow, housebreaking, in particular, was getting out of hand.

Things came to a head in 1908 at a large house in the city’s Kelvinside area, where James Fleming, son of a wealthy Glasgow family, traded shots with an armed robber, fatally wounding him.

At a subsequent Fatal Accident Inquiry, the Sheriff declared Mr. Fleming had acted in self-defense – and complimented him on his marksmanship.

The incident shocked the city, and with serious crime and violent housebreakings on the increase, concern was rising both among the public and police force – it was clear something had to be done.

In February 1910, a letter arrived at the police headquarters in Glasgow’s St Andrew’s Square from a Lt Col Edwin H Richardson, who had established a dog training school at Carnoustie, along the coast from Dundee.

Richardson’s dogs had been training with army units at the Barry Buddon military base and would go on to serve with distinction on the front lines of World War One just a few years later. But their first real taste of action was alongside the Glasgow constabulary.

Richardson had contacted every chief constable in the UK, up to that point without success – and according to Alastair Dinsmor, curator of the Glasgow Police Museum, “we just happened to be the ones who were in desperate need of some solution to a problem”. 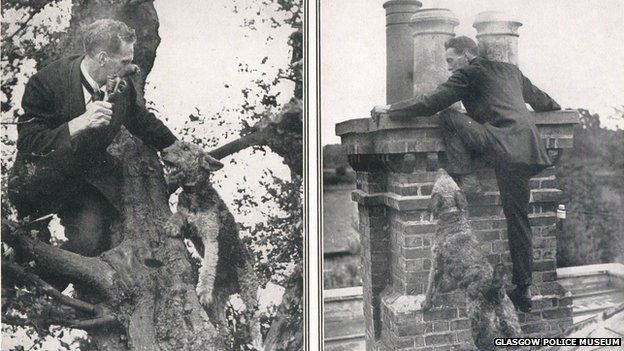 Richardson had bred a dog, especially for service in the police; dubbed “The Executive”, these dogs were bred mainly from Airedale terriers, with collies, for their brains, and retrievers, for their sense of smell.

Wendy Turner, secretary of the Airedale Terrier Club of Scotland, refers to Airedales as the “king of Terriers” – and says they are ideally suited for police work.

“They’re big terriers, they’re faithful, very athletic, they really can use their strength properly,” she said.

“They’re nosy dogs, so they would sniff anything out – if anyone was hiding, they’d find them.”

The dogs were trained to assist officers on night shift and use their superior senses to sniff out housebreakers lying in wait in the city’s large gardens and parks. 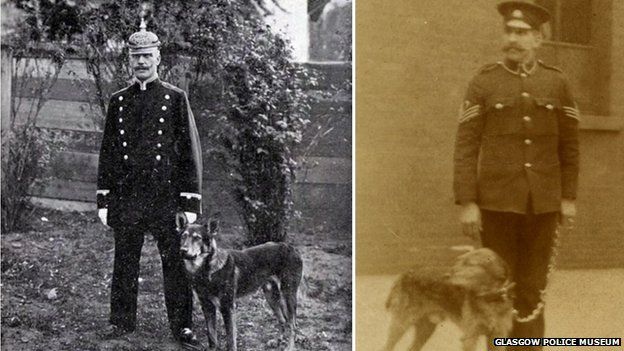 Dogs were commonly used in police forces on the continent but there was some debate over whether they should be introduced in Glasgow.

At a meeting of the Watching and Lighting Committee discussing the idea, one representative moved against the plan, noting: “Why should they have dogs, as if they were living in Borneo or some of these savage countries?”

Another, on hearing that police in Paris regularly patrolled with dogs, stated that they were fortunate that there were “no hooligans of the Parisian type” in Glasgow.

However, the committee eventually relented and agreed to the idea of an experiment. They authorized the purchase of four dogs from Lt Col Richardson at the cost of £21.

The first two dogs arrived in the city from Harrow on 28 June and were kennelled at the central police office on Turnbull Street before being deployed to the Kelvinside beat with Maryhill Division.

The second pair of dogs arrived the next day and were assigned to the Pollokshields area with Queens Park Division.

There was a great deal of local press coverage of the dogs’ arrival; the Glasgow Herald declared it the first time dogs had been utilized in Great Britain as an aid to the police.

But the police force themselves were strangely quiet on the issue; there was no mention of the dogs in the chief constable’s annual report, despite their apparent success. 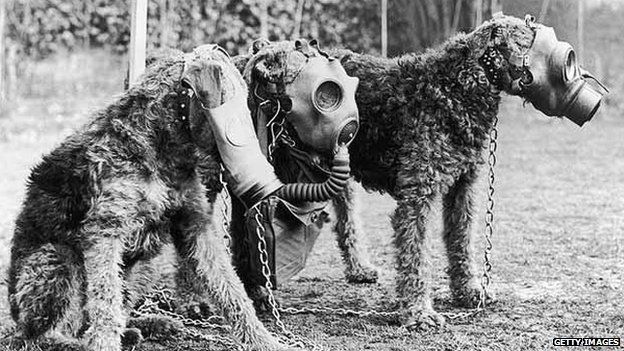 And there are little few further historical records of the dogs’ exploits on the streets of Glasgow – until one made the papers by biting a fellow officer in 1913.

The biting incident, which was reported in the Evening Times on 3 February 1913 and saw the unnamed officer take the rest of the day off with a minor injury, confirmed that the dogs were in use for at least three years.

However despite their success, it seems the use of the dogs was phased out, and canine recruits were ultimately absent from Scottish beats until well after World War Two.

“They were phased out and there was no other use of dogs until the early 1950s when two officers were sent down to London and came back with German Shepherd dogs and that was the start of the Dog Branch.”

Two Glaswegian constables, Jim Roache and Fred Boulton were sent for a 14-week dog training course with the Metropolitan Police. They returned with a pair of hounds named Prince and Shan – one donated by the London police and the other bought by the local force.

And although though it was with these two German Shepherds that the City of Glasgow Police Dog Branch was established in 1953, there was, at last, some recognition for the Airedales of 1910 – they finally merited a mention in the chief constable’s annual report.

So Richardson’s canine constables may have been a few decades ahead of their time patrolling the streets of Glasgow.

So Richardson’s canine constables may have been a few decades ahead of their time patrolling the streets of Glasgow.

But Scotland’s police dogs have more than earned their place on the force since.