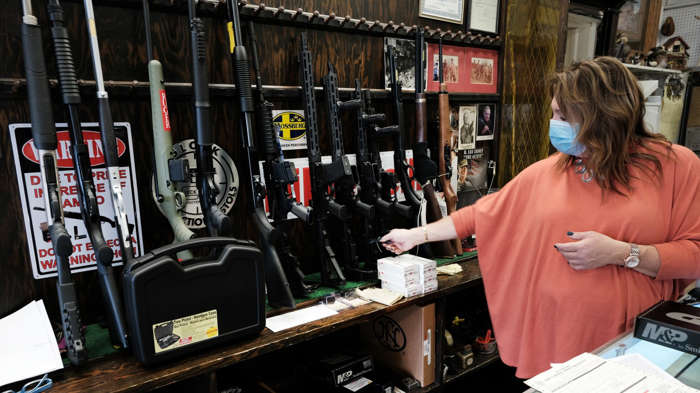 Gun violence has become a regular part of the headline news the past year. Murders in American cities spiked in 2021, particularly in large cities, with guns involved in most of these. And already, there have been 6,274 gun deaths across the country so far in 2022 (as of Feb. 23), according to the Gun Violence Archive. (These are cities where the record for most murders was broken in 2021.)

Even with stricter gun ownership and purchasing laws, there is no getting around the fact that about 400 million guns are currently owned by private citizens, the police, and the military. Programs meant to give people incentives to turn in guns cannot make much of a dent in gun ownership. (These are the states with the best and worst gun laws.)

There are several theories about the sharp rise in gun sales over the past two years. Among them is the violence in American cities during protests. Another is the fear that people might have during the pandemic that they need to protect their property, even if this is absurd. (These are states with the most gun violence.)

One fact about recent gun purchases stands out. The Economist recently referred to a study by Matthew Miller of Northeastern University and his co-authors that found that of first time gun buyers between January 2019 and April 2021, “half were female, a fifth black and a fifth Hispanic.”

Inexplicably, gun sales collapsed in January 2022, compared to January last year. There were 2,591,588 background checks in January, 60% of last year’s figure of 4,317,804. The recent figure was the lowest January total since 2019, though the number remained high in some states. They were particularly large in Illinois at 473,953, or 18% of the NICS total background checks that month.