Mapped: Corruption in Countries Around the World

How bad is public sector corruption around the world, and how do different countries compare? 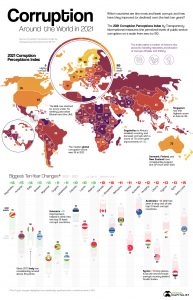 Mapped: Corruption in Countries Around the World

No matter your system of government, the public sector plays a vital role in establishing your economic mobility and political freedoms. Measuring corruption—the abuse of power for private gain—reveals how equal a system truly is.

For more than a decade, the Corruption Perceptions Index (CPI) by Transparency International has been the world’s most widely-used metric for scoring corruption. This infographic uses the 2021 CPI to visualize corruption in countries around the world, and the biggest 10-year changes.

Which Countries are Most (and Least) Corrupt?

How do you measure corruption, which includes behind-the-scenes deals, nepotism, corrupt prosecution, and bribery?

Over the last few decades, the CPI has found success doing so indirectly through perceptions.
By aggregating multiple analyses from country and business experts, the index assigns each country a score on a scale of 0 to 100, where 0 is highly corrupt and 100 is very clean.

Here are the results of the 2021 CPI, with the least corrupt countries at the top:

Ranking at the top of the index with scores of 88 are Nordic countries Denmark and Finland, as well as New Zealand.

They’ve consistently topped the CPI over the last decade, and Europe in general had 14 of the top 20 least corrupt countries. Asia also had many notable entrants, including Singapore (tied for #4), Hong Kong (#12), and Japan (tied for #18).

Comparatively, the Americas only had two countries score in the top 20 least corrupt: Canada (tied for #13) and Uruguay (tied for #18). With a score of 67, the U.S. scored at #28 just behind Bhutan, the UAE, and France.

Scoring towards the bottom of the index were many countries currently and historically going through conflict, primarily located in the Middle East and Africa. They include Afghanistan, Venezuela, Somalia, and South Sudan. The latter country finishes at the very bottom of the list, with a score of just 11.

Corruption is a constant and moving global problem, so it’s also important to measure which countries have had their images improved (or worsened).