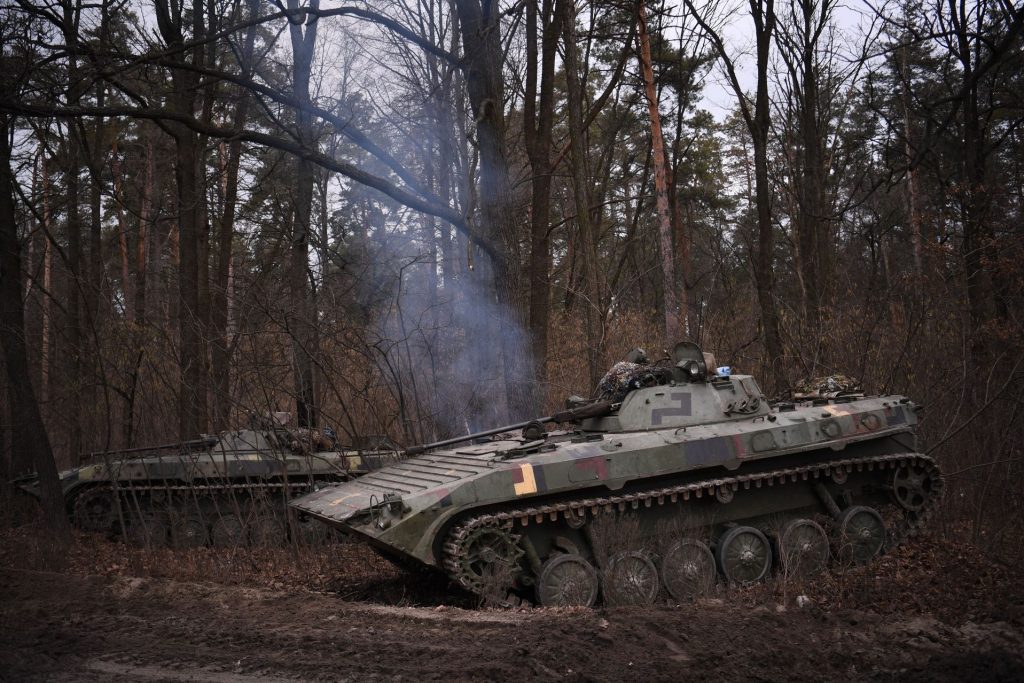 This photograph taken on Feb. 24, 2022 shows an Ukrainian infantry combat vehicle BMP-2 standing guard on the outskirts of Kyiv.

There was a time not long ago when Europe was seen by much of the world as a model for peace and cooperation. The Cold War had ended with the peaceful implosion of the Soviet Union. The European Union, the Organization for Security and Cooperation in Europe, and other similar institutions were seen as a beacon for the rest of the world, including Asia and the Middle East, to emulate. Europe was “primed for peace,” wrote Massachusetts Institute of Technology’s Stephen Van Evera in 1991. Princeton scholar Aaron Friedberg concurred: “The movement toward democracy, equality, and cosmopolitanism in each of the states in Europe, the increasingly dense and diverse linkages between them and the mounting costs and declining benefits of war among them have mutually reinforcing effects” and “taken as a whole their impact would be ‘overwhelming’” in creating conditions for peace.

Today all these claims are shattered. How did Europe come to this? What are the implications for world order? While the Ukraine situation continues to evolve, some consequences immediately come to mind.

To begin with, the Ukraine crisis is another nail, perhaps the final one, in the coffin of the postwar liberal order. The order was already fraying due to a global economic shift from the West to China, among others. That shift was in motion even before President Trump assumed office with a foreign policy agenda that distrusted both economic globalization and multilateral institutions. President Biden upon taking office pledged to “repair our alliances and engage with the world once again.” But the Ukraine crisis would go on to impede multilateralism, paralyze the U.N. Security Council, and severely limit cooperation among the major powers. It would return the world to opposing power blocs where the U.S. and its NATO allies faced Russia and China.

Predictably, in confronting Russian President Vladimir Putin, Biden has turned to NATO. There have been celebrations about renewed NATO unity brought about by Putin’s provocations. But NATO has been as much part of the problem as of the solution. Writing in the New York Times in 1997, George F. Kennan, the father of the U.S. “containment” strategy against the Soviet Union, warned, “expanding NATO would be the most fateful error of American policy in the entire post-cold-war era.” Kennan’s warning has proven correct. Some influential commentators, such as former U.S. Ambassador to Russia Michael McFaul vigorously reject the view that NATO expansion had anything to do with Putin’s Ukraine move. But alliances are known to provoke as much as deter conflict. In fact, recognition of the war-making effects of Europe’s alliances led President George Washington to pursue a foreign policy “to steer clear of permanent alliances,” while the same distrust led Presidents Woodrow Wilson and Franklin D. Roosevelt to advocate a universal security system.

The Ukraine crisis not only challenges peace in Europe, it will also test U.S. global strategic goals. The U.S. is now facing the prospect of a two-front war, especially if Putin’s military moves go beyond Ukraine. In sending troops to Ukraine, Putin has threatened to inflict “consequences you have never encountered in your history” on countries that try to stop him, a threat directed more at Europe, including the new NATO nations in the Baltic, Lithuania, Latvia, and Estonia, than at the U.S. Biden has said that the U.S. had “no intention of fighting Russia”, but he also wants to “send an unmistakable message that the United States together with our allies will defend every inch of NATO territory and abide by the commitments we made to NATO.” Some of that territory could well turn out to be those of these Baltic states. But it is not unreasonable to ask: Will the U.S. risk a nuclear war to defend Vilnius, Riga, and Tallinn?

About the author: Amitav Acharya is a professor of international relations at American University in Washington, D.C., and the author of The End of American World Order.